Hey! It’s been a while since my last post here…

I got my Japonism DVD from CDJapan one day after the release date! One thing I love about CDJapan… The EMS shipping is fast. In the past, they shipped Arashi releases on the Saturday before it was released, but I think fans and JE got unset because those overseas got their DVDs/Blu-rays as early as Sunday and posted leaks all over the web, so they start shipping on Monday (JE releases usually come on Wednesday) this time instead. 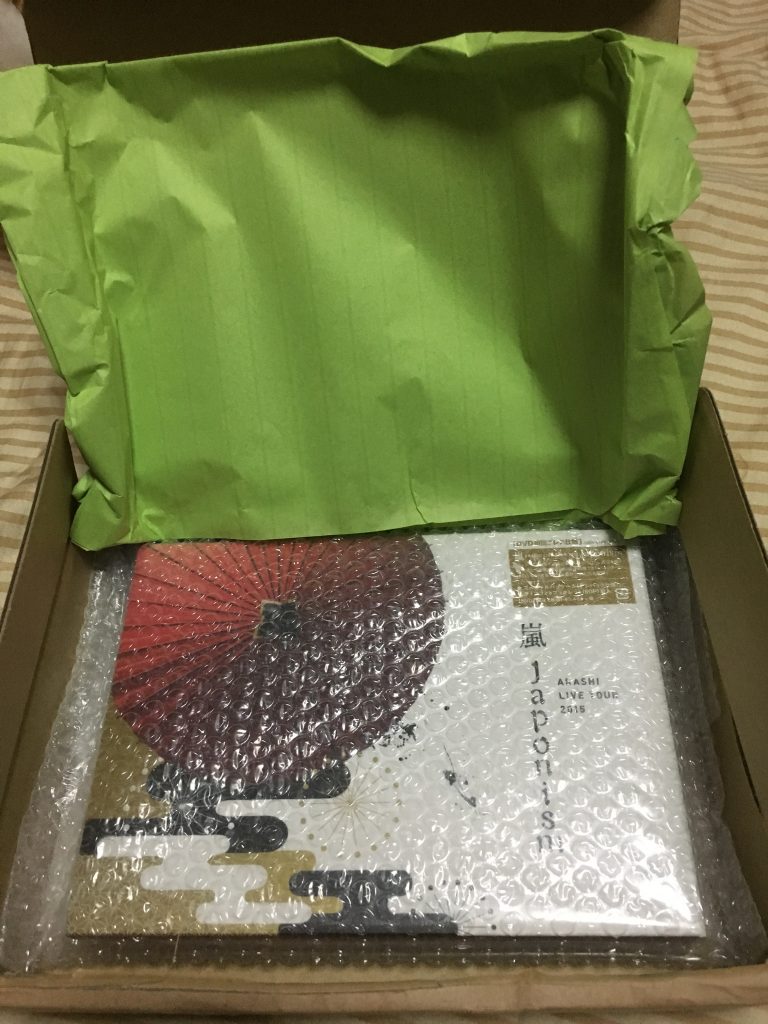 Here’s the DVD, in all it’s bubble wrap glory.

I wasn’t expecting the DVD to be longer than it is tall, so it’s a pretty unique looking DVD. 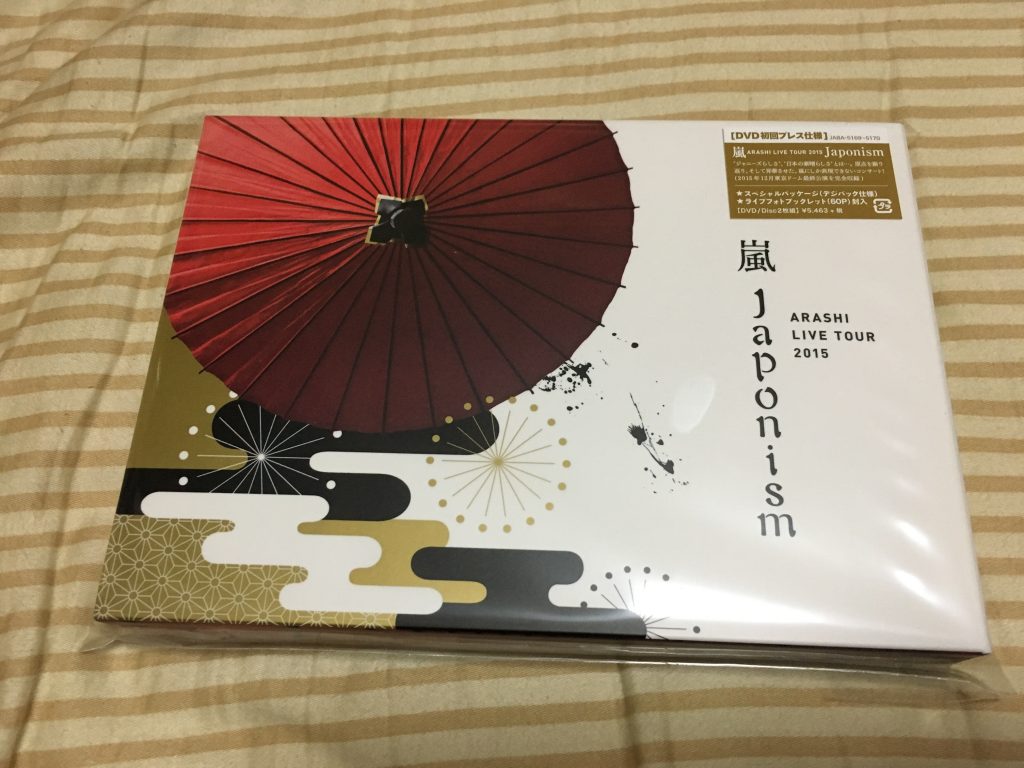 The DVD cover looks really nice and reeks Japanese. It’s made of nice smooth cardboard, and doesn’t look shabby at all. A friend complained that the cover design looks too… Generic. As if they just put a bunch of shapes and patterns together in photoshop. Which is kinda true, but compared to some of their previous covers? I’ve got no complains about this one at all. Really.

Take Hawaii Blast for example. Why the need for the color filters? The LE version looks slightly better. Only slightly. And Miyagi Blast? Doesn’t look too bad, but tell me what the theme of the cover is about or where you’re supposed to look. No idea? Me neither. The LE version that I got actually looks even messier IMO.

But those Arashi concert DVD covers are already the decent ones. Some of the earlier covers are just like…

Take the Beautiful World DVD cover. Supposedly it’s a sea of penlights, as seen by the members from the stage. But no, whoever thought of that DVD cover idea just…. Arghs. It looks like a printing error.

There is more and worst. Arashi Around Asia 2008 in Tokyo. It looks like… The staff at JE just learnt how to use Adobe Illustrator and that was the only thing the poor guy could draw. Well at least they used that symbol for the whole concert and there’s a common theme throughout there. Still, it’s totally taking the easy way out. As with Love concert 2013. What can I use to symbolise love? Kisses maybe? What else? I can’t think of anything else, oh wells, I’ll just copy and paste a crap ton of kisses on the cover and be done with it. shudders

Maybe the worst covers has to go to Iza Now and 5×10 though. Iza Now I could still understand I guess. Arashi isn’t all that popular in 2004, they are still relatively nobodies and JE can’t be bothered to spend more resources on their DVD cover… So the task was left to somebody with no graphic designer experience at all. And all the poor guy would do was pick some concert screenshots and do some pretty word art and put it on the covers. But 5×10? Their 10th anniversary, HUGE concert? I seriously cannot understand. TBH it looks even more than Iza Now. At least Iza Now had pretty word art. 5×10? Just a crap ton of copy and paste photos. Like WTH? Maybe this time round, Arashi is so popular that JE can’t be bothered to get a graphic designer for the DVD cover. The DVD will sell anyway…. shrugs

Either way, the Japonism cover goes under the ‘really good’ category of Arashi DVD covers.

So back to the unboxing. 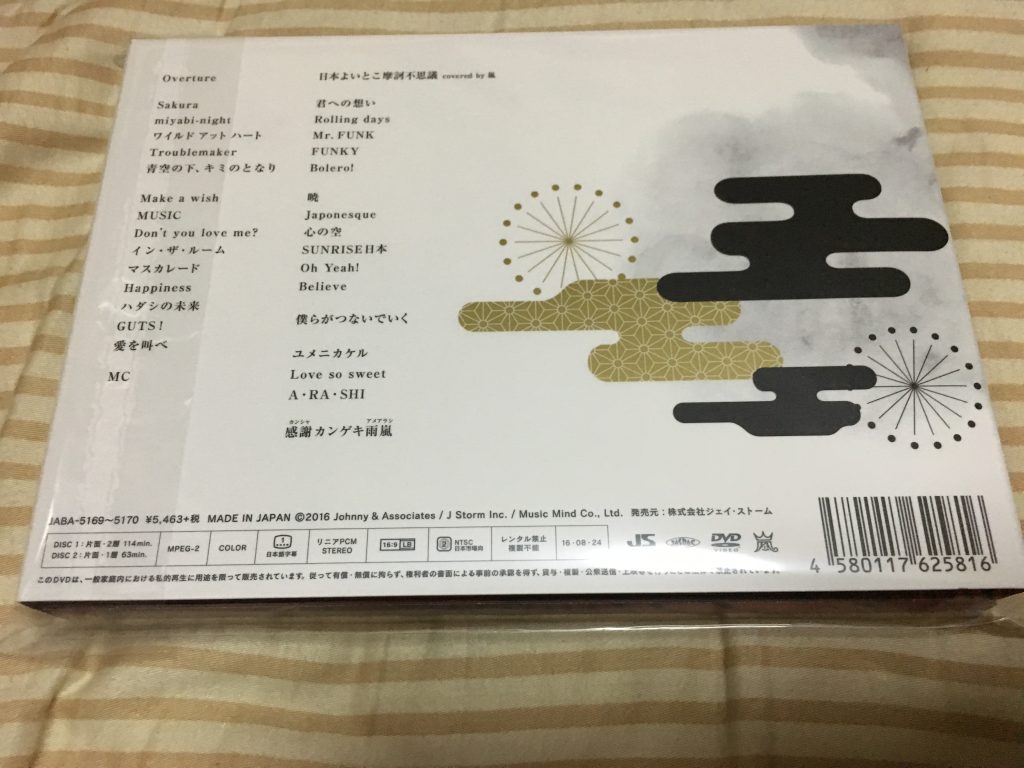 We saw the front… So now this is the back. Continuation of the Japanese patterns and the track listing. 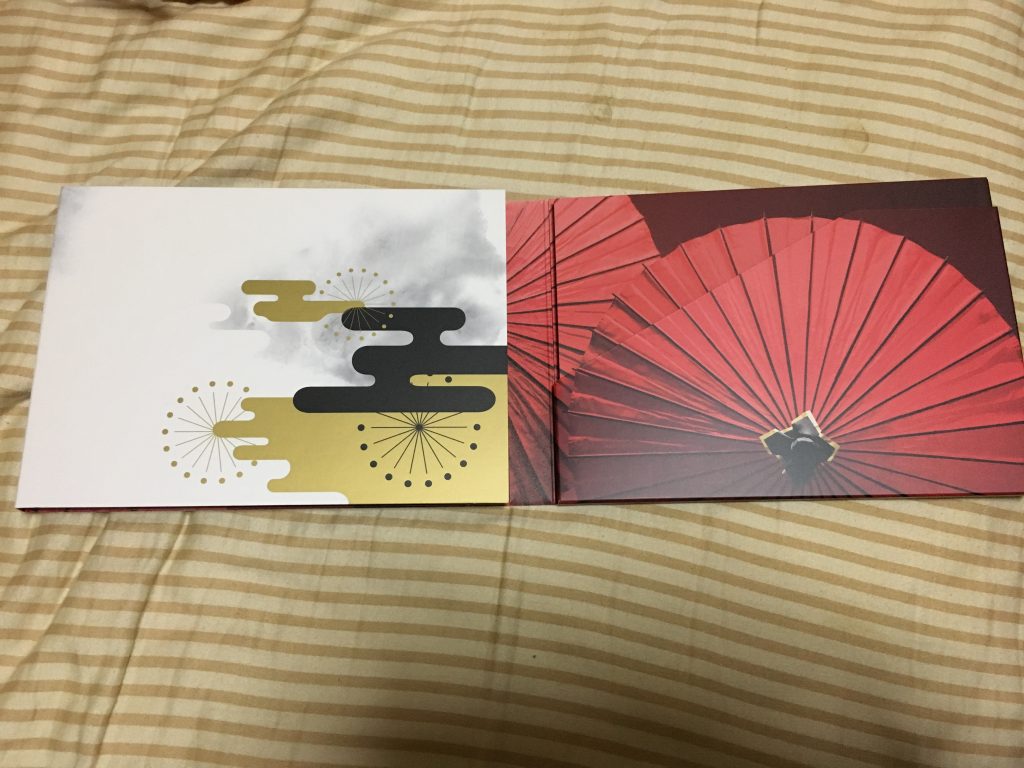 The DVD opens all the way up to reveal three panels. 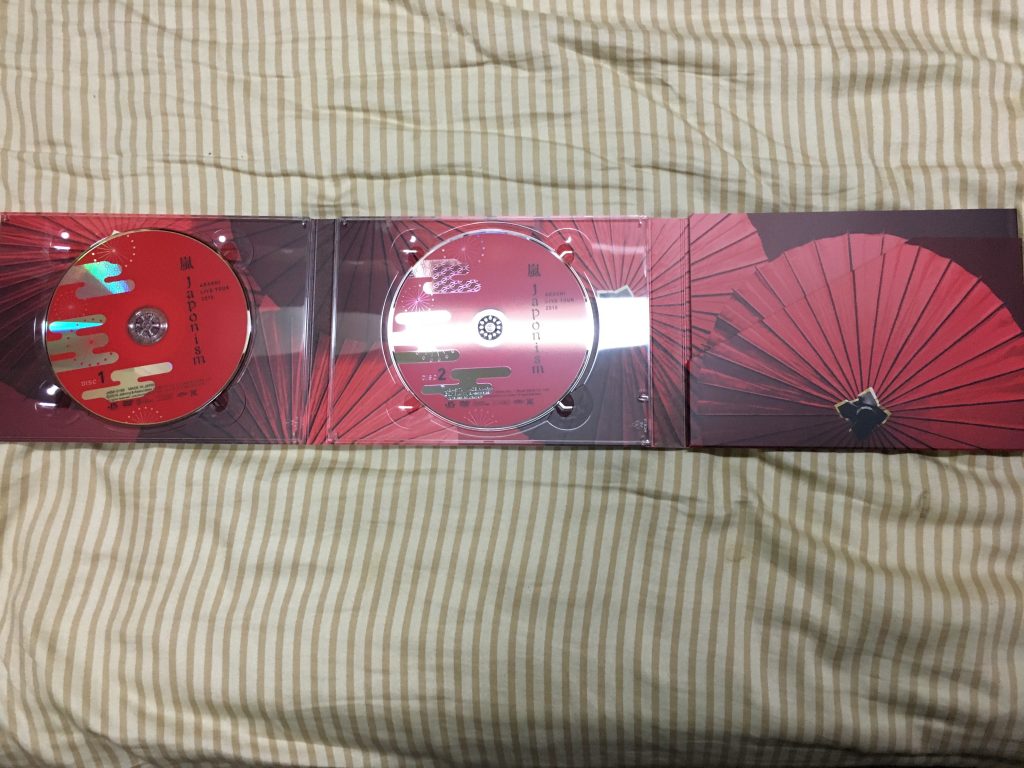 Two discs on the left and middle, and the photo booklet (I got the limited edition) on the right. 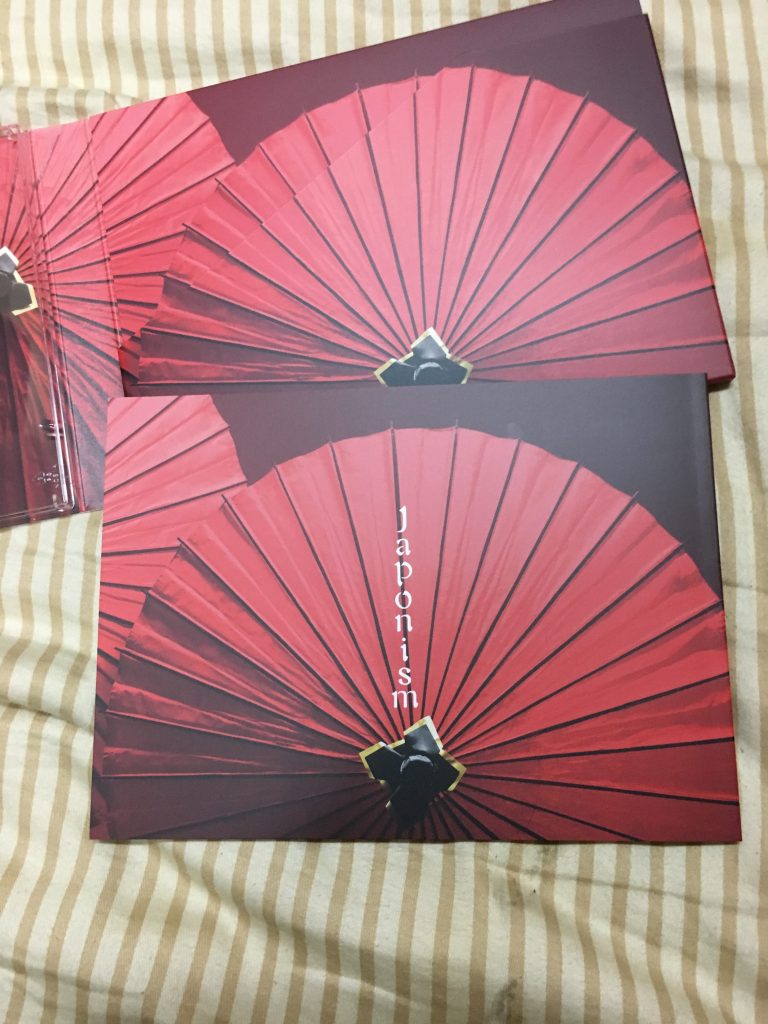 That’s the photo booklet, make of the same smooth cardboard on the cover, and thick glossy paper inside. 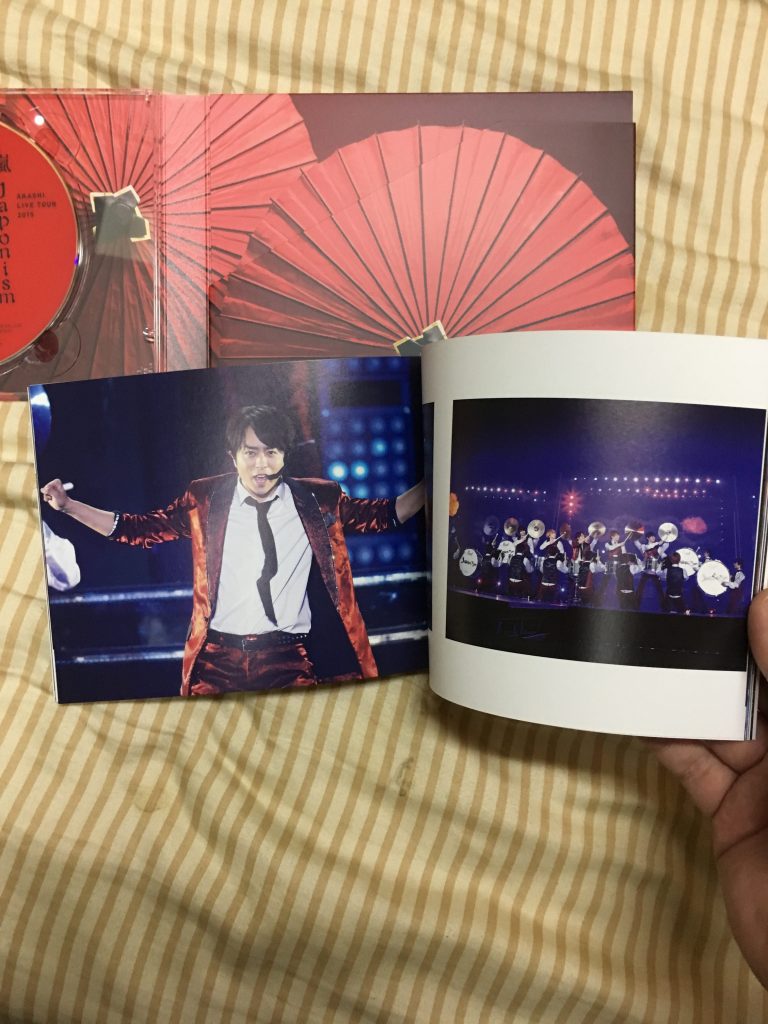 Inside the photo booklet

And that’ a peek inside the photo booklet.

Having finished watching the concert last week, here’s some of my thoughts.

First of all, this concert was fabulous! I hadn’t watch any news clips or read any concert reports, so I was truly in for a surprise and a treat. The stage set up had already blown me away. Everything, from the stage to the costumes, just reeked Japonism. And some of the Japanese-like moves they incorporated into their dance? My favourite. Only complain is that I thought they would go straight into Kokoro no Sora after the whole Japanese dance/music segment, with the samisen and drums playing and all… But nope, they sang Japonesque instead, which ended up sounding very very weird. Sure, the lyrics was praising the beauty of Japan, but the song itself, the music, was extremely modern and western, and threw a spanner into an otherwise really beautifully traditionally Japanese segment.

Each member learnt a new skill for their solo, and that brought a lot of exciting elements into the concert. Nino kicked off the a hilarious yet stunning tap dance performance. He made perfect usage of the LED (or whatever) flooring with his personal rendition of dance dance revolution. Jun showed off his cool side with an exciting parkour chase around the stage. As much as it had nothing to do with his solo song… Matsumoto Jun just love showing off how cool he is and well, he succeeded. Ohno did some mask/umbrella magic trick… But I found the magic tricks superfluous. Ohno’s dance during his solos, together with his superb voice, has always been the highlight, and once again he didn’t disappoint. You’d have pretty much forgotten about his magic tricks earlier by the time he starts dancing, because geez, Ohno’s dance IS magic. Flowing smoothly through the moves, and yet stepping forcefully in rhythm with the song. Oh have I mentioned that he always choreographs his own solos?

Sho’s solo was… Meh. I love the solo song, it’s my absolute favourite song in the whole album. But Sho isn’t a good performer and Sho and drums didn’t create any sparks. I’d give him credit for always working so hard and doing his best, and the performance was indeed better, less stiff, than his piano performance in Kouhaku some years ago. But unfortunately his drums didn’t add much to the solo, and unlike Ohno, Sho doesn’t dance magic. His rap was fabulous of course, but so was his rap in the studio recording. I always hope to see them add more to the song from just it’s recording – that’s the point of concerts after all – but sadly Sho’s solo didn’t hit the mark for me. A real pity, because I absolutely loved the song.

Aiba’s performance came right after Sho’s, and his stunning stunts makes Sho’s look even worst in comparison. What did Aiba do? He did aerial silk. I.e. hanging from the air by just two piece of ribbons. I would be an unappreciative fan and complain that he didn’t do much tricks. Only hanging on the ribbon during his entrance, and one major ‘falling down’ trick at the end. But I give him points for the courage needed to do these tricks (nope, no safety line whatsoever, just like a real aerial silk performer), and those tricks must have been very physically demanding as well. Not to mention time consuming to master, both of which probably contributed equally to my complain. Of course, he did sing his solo in between and did some nice dance moves together with a bunch of Johnny Jr’s. Including some of the youngest juniors… But between me watching out for the cute juniors and wondering when Aiba will get back on the ribbons… I can scarcely remember what his solo was like. The big trick at the end was satisfying enough for me though.

I loved how they actually, finally, didn’t cut the MC. Why? Well because their MCs are pure love. A perfect mix of seriousness and wacky. It’s when Arashi shows their relaxed, casual self, and also exhibits the great friendship they have with each other.

Higashiyama Noriyuki made a surprise appearance in their concert, and what a surprise it was indeed. He sang and danced the last part of “Nihon yoi toko makafushigi”, a song from Shonentai – a three man group Higashiyama was part of – that Arashi was covering.

Overall, it was a great concert. From the use of the centrally controlled penlights that they had perfected the year before, to the overall theme of the concert. This has certainly overtaken Digitalian to become my favourite Arashi concert of all time.

Until the next great one comes along that is!