Hi! So… I was really busy last weekend and didn’t manage to get this post out…. this is a little late but enjoy!

Remember I talked about how the kanji 金 can be a radical? That’s right! When 金 is part of a kanji as a radical… you can bet that the word has something to do with metals. 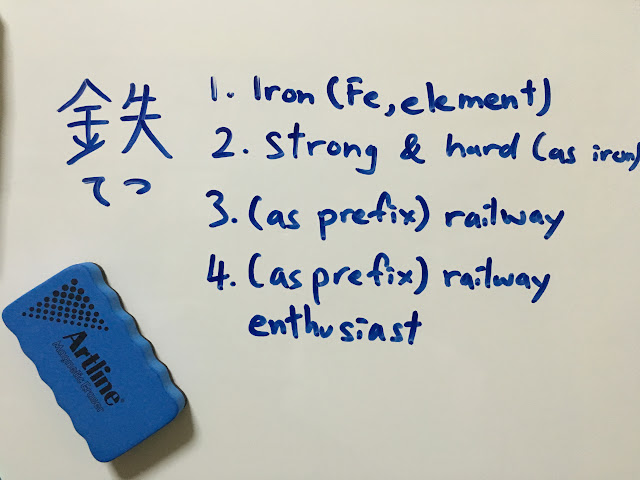 So there you have it, the definition of 鉄.

A closer look at the word.

And that’s the stroke order. Always remember – top to bottom, left to right.

For this word, it’s not really a 50-50 split. The radical is slightly smaller – the right side crosses over to the left half a little.

This kanji is made of two parts, and both of them full kanjis on it’s own. Gold, as we learned earlier is also used as a radical, and 失 makes up the right side. Here, there’s not really a logical reason why 失 is on the other side of the word (not that you can tell from the modern day meaning at least), but kanji wise, it’s the radical that you should look to primarily for hints of the meaning.

金 as a radical

When words are turned into radicals, they are tucked/trimmed in ways to make it more compact. Here, the last, long stroke is tilted upwards so that it is more compact.

Alright! That’s all for today! Till next time!